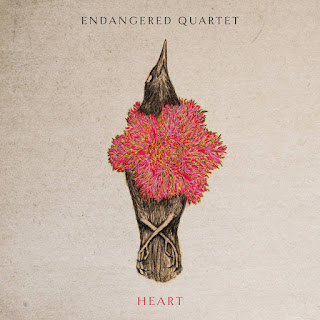 Things that are unpredictable and open tend to be interesting if they are at the same time artful. That applies to a group that calls itself the Endangered Quartet and their recent album they call Heart (Panoramic Recordings PAN15). The idea centers around the four musicians who came to know one another well musically and otherwise, essentially in between as well as in the middle of the sort of  musical projects one falls into as opportunities arise.

The music making in between the bread and butter gigs spawned the idea of the Endangered Quartet. Specifically two years ago saxophonist Roy Nathanson hosted a somewhat spontaneous and informal get together in his Brooklyn living room with musical friends and associates Curtis Fowlkes on trombone, Tim Kiah on bass and Jesse Mills on violin. The idea was to form a composing collective. As Nathanson remarks in the liners "We built it around the idea of letting the instruments have a certain intimacy together, one that allowed for the compositions to breathe." The total equality of the four together without hierarchy was the other basic assumption.

The basic idiom of the group is multiplicity--in a chamber mix of classical, jazz, plus a few rock and folk elements. The lack of a drummer does tend to open up the sound, that and the eclectic mix of elements does what some of Jimmy Giuffre small groups did in their classic days perhaps. Not to put too fine a point on it but there is a similar open space for breathing yet the sound is most definitely their own, definitely that of the Endangered Quartet.

The nine originals define the sound the group is after nicely. The four "covers" help make clear the roughly hewn and lively spontaneity that subsides with the arranged milestones that set off a strong sense of intimate interplay, They also serve to illustrate just how far ranging the group traverses--A very familiar Chorale of Bach with new lyrics by Kiah, the Beatles' "Blackbird" with a band vocal and some pretty free improvising between the soundings of the head melody, Ornette Coleman's "The Circle with a Hole in the Middle" played with soul and freedom, and Leadbelly's iconic "Goodnight Irene" done with disarmingly straightforward qualities.

The melding of open expression and binding structure, vocal and instrumental, genre bending and genre grafting, the free from of contemporary improvisatory ways with classical edifice shadings, all these elements work together to create a novel freshness that wins your attention and brings surprise and pleasure if you listen with an open mind. Happily recommended.
Posted by Grego Applegate Edwards at 10:05 AM