Gao Hong & Issam Rafea, From Our World to Yours, Chinese-Syrian Musical Collaborations 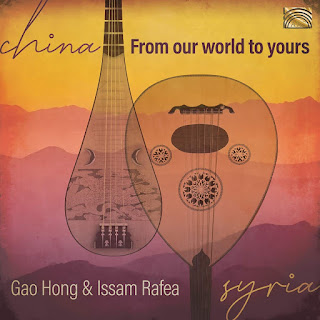 The album featured today is in fact the follow-up to an earlier duet that garnered praise and acclaim since its release. It all came about when Syrian oud virtuoso Issam Rafea was invited to the US for a residency at Carleton College, where Chinese pipa virtuoso Gao Hong was a faculty member. They ended up recording in 2017 a completely spontaneous duet album that was subsequently named Life As Is. It was nominated for several Independent Music Awards and garnered critical accolades.

Now they return for a sequel, From Our World to Yours (ARC Music MCPS EUCD 2899). The music as on the first album comes out of a mutually attuned sensitivity towards the stylistic background and musical personality of the duo partner. So also there is a real-time accommodation in the mutual use of space, leading and accompanying and attention to the natural timbers of each instrument in tandem. Minor modes and pentatonic expressions join the two artists and cultures. The close dialog that results is rare and finely executed.

Some fifteen improvised segments flow through our listening senses in the nearly hour-long program. It is the most productive of cultural exchanges, a true bridging of two venerable traditions via two brilliant exponents. The masterful Gao Hong and Issam Rafea leave us with a most pleasurable and striking synergy on From Our World to Yours. It is a triumph of the globalized world we live in today, perhaps almost unimaginable 100 years ago. That it took place is cause for appreciation; that it is as brilliant as it is comes out of the sheer musical inventiveness and exceptional openness of the two artists involved. Bravo!

Posted by Grego Applegate Edwards at 7:51 AM