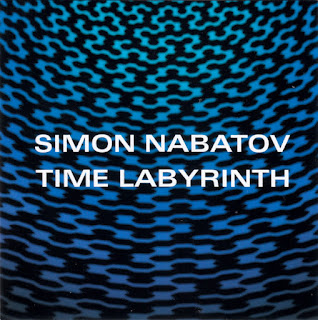 Jazz pianist-composer-stylist Simon Nabatov flourishes on a recent release of a larger band outing entitled Time Labyrinth (Leo CD LR 881). It is a vibrant and nicely put-together program of six Nabatov compositions, played nicely,  backdropping spotlight improvisations that flesh out the ideas and give them the immediacy of now. The zone occupied is Avant-Free as you would expect, the compositions are thoughtful, the soloing significant. And it is a winner.

Joining Simon at the piano are Frank Gratkowski on reeds, Matthias Schubert on tenor sax, Shannon Barnett on trombone, Melvyn Poore on tuba, Dieter Manderscheid on double bass and Hans W. Koch on synthesizer. The lack of a drummer opens up the articulation of the musicians into a slightly more New Music-chamber zone without negating the cutting-edge Improv orientation of it all. Some most notable of the collective improvisations give us a stunning Nabatov paving the way with his intricate pianisms--for example hear the opening "Waves" and following "Metamorph," the latter especially intriguing with its harmonic sequencing yet ultimately its pan-tonal texturing.

"Reader" follows with Gratkowski's flute handing the lead melody over a richly harmonic accompanying field of horns and piano. "Right Off" is another high point with Barnett's trombone taking center stage while dynamic pointilistic entrances to second the solo eventually prevail--the latter distinctly in a presence from Nabatov and ensemble.  "Repeated" has some breathtaking piano moments. "Choral" ends us with a very memorable theme and a dramatically fitting close to a truly superlative sonic adventure.

This is a stunning program that anyone should listen to closely, anyone who wants to know what's happening in the most current avenues of Improv and Avant Jazz.
Posted by Grego Applegate Edwards at 8:01 AM