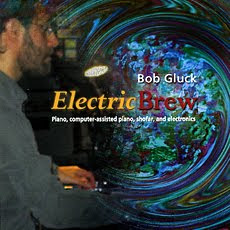 A prelude-like moment for the piano, the sounding of a shofar horn and electronics set the stage for Bob Gluck's Electric Brew (EMF 069). It came out in 2007, and so it is most certainly not the flavor of the month. And it was not meant to be so. It is music for the long haul.

Bob plays a kind of improvised solo piano that has a particular sonority in mind regardless of where he is in his performance. He can go the jazz-derived improvisational route or hew more closely to the modern jazz sound. Or he can sound like he's coming out of an avant classical frame of reference. In any of these cases he remains his own person.

Electric Brew provides you with a great example of his musical personality. The piano comes across as the principal voice in his music. Electronics augment, contextualize or provide a second voice in the mix. In the case of the use of "computer-assisted" piano, the piano voice and its electronic manipulation go together. What's important is that the electronics are well-integrated and add much to what transpires. It never feels like they are an afterthought to the principal music-making.

Mr. Gluck has a fertile and richly complex musical imagination and it comes across well in this program. The music has an avant feel to it but communicates an ordered sonoral vision. The musico-structural architecture leaves the beams exposed, so to say, in that you can hear Mr. Gluck's structural sense in motion at most points.

It's very interesting music, a tour de force of advanced pianism and in its own way pioneering in its singular use of electronics. Very much recommended.
Posted by Grego Applegate Edwards at 4:32 AM