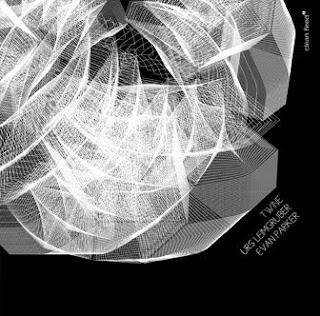 Essentially Evan Parker has over the 40 odd years of his public career sought to perfect a style complex that makes use of punctuated sounds, rapidly swooping slurred lines, enveloped phrasings and expanded timbral resources for the saxophone. By now he can be relied on to do what he does very very well, every time out. His execution and concept are masterful. But his single-mindedness of purpose also means that some of the surprise in the music has become diminished. So he keeps it fresh by varying the players he associates with on any given project. His prolific recorded output would seem to demand such a stance. And this way of going about it gives the Parker aficionado a good deal of variety in the overall sound of the ensembles he consorts with.

So we have a new one, Twine (Clean Feed 194) which pits him in a series of involved improvisatory duets with fellow reedman Urs Leimgruber. Both alternate between the tenor and soprano. The recording was captured live in Koln.

First off Urs certainly seems well suited for such a duet. He has a long track record of avant improvisational collaborations and has a style that fits what Even Parker does from angular phrasing to a richness and variety of timbre.

Second of all the structure and content of the duets is one of all-over density and continual flow. They get rolling on a pace and set of sound producing ideas and stay in that mode for some time, seeking to explore the sorts of possibilities that approach will reveal.

The results are rarefied whirlwinds of sound. Parker and Leimgruber get locked in and stay there. Now the question is whether you would find this music stimulating and how much of this sort of thing you are interested in hearing. I cannot give you that answer. It is cutting-edge avant improv, certainly. If you already have, say, 100 Evan Parker recordings, this may not add a lot that is new to what you already have. If sound-color oriented improvisations interest you and you don't have much exposure to the artists at hand, this is a good bet. If you like the idea of a bare-bones avant duet with two of the more successfully adventurous sax players out there, again this will be of interest.
Posted by Grego Applegate Edwards at 4:39 AM