Sarah Wilson's "Trapeze Project" Breaks the Rules of What Modern Jazz is Supposed to Be! 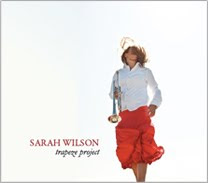 We all know that music, like anything else, develops normative standards for what is supposed to be done in a particular style category. What is played as "Free Jazz," for example, has sometimes been codified in a set of unexpressed rules for what is acceptable and what is not. It isn't free in that sense. Not if being "free" is doing something essentially unfree. In another example the sonata form originally was a rough way of composing. Only later did it become a kind of rule book of prescriptive practice, systematized into a formula that very few composers had followed in the all-or-nothing sense it later was presented as. The critic, music theorist, music commentator and/or what have you helps shape the expectations of a listening public by these means. As a form of music matures, more and more rules and expectations form around it, until artists come along and topple the system by breaking the rules and starting the game over again.

Sarah Wilson could be one such artist. She certainly is on her own turf. Whether this will be something the music community sees as emblematic of some "new" music movement or not is irrelevant I suspect in terms of her new CD as we stand today looking forward. What counts is the music and whether it's worth hearing, for now.

What strikes me on repeated listenings to this disk is how lyrically melodic she is. Her songs are very memorable. The songs that feature her vocals have a special folk quality. She sings about longing, hope, the complex simplicity of childhood as seen in retrospect, going home, losing home....Her vocal style is warm and direct, and not what one expects for a jazz artist.

Mingus once declared that jazz is a folk music. And of course it is. When you listen to Sarah Wilson's music, you feel that strongly. It has improvisation. It has the sort of rhythm section things one expects to hear (and they sound fine). Sarah, Myra and Ben make congenial sounds together and as soloists (as does Jerome Harris in his solo time). But you get the feeling that "here is music, plain and simple in its essence." It doesn't try to kill you with fast runs or various postbop phrasings. It simply goes the way that people letting themselves articulate their music history at the cumulative point of the NOW moment are allowed and willing to do. They play what seems right for the songs. AND damned if it isn't right.

Even when they do the Goth anthem "Love Will Tear Us Apart," there is no self-conscious posturing involved in doing it. It isn't a gesture of "Oh, look at us. We can do material that comes out of rock." They just do it with straightforward conviction.

What could come off as mannered, cute or contrived in other hands speaks straight to the ears and heart. That is quite rare and Sarah Wilson's album is that. She doesn't try too hard to be different. She just IS. Check this album out for a revelation of refreshment! It's either the pause that refreshes or something more for a future way to go. Time can tell us that if we live long. Otherwise it will be up to those who aren't here yet. That's true of all music. But it may be even more true of this music. Either way it's a damned fine record.
Posted by Grego Applegate Edwards at 5:18 AM