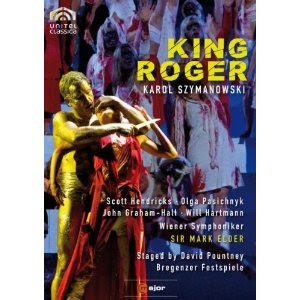 Polish composer Karol Szymanowski (1882-1937) is known, at least here in the States, as primarily a composer of solo piano music that takes its cue from Chopin and Scriabin. His harmonically advanced and very pianistic writing has a poetic touch and a depth I for one have appreciated very much over the years.

Szymanowski the composer of large-scale orchestral and operatic works is a lesser known commodity. So when I had a chance to review the new DVD release (C Major) of his opera King Roger I welcomed the chance to get to know the work.

The opera was first performed in the mid-'20s and has not since garnered the sort of standard performance rotation that Berg's Wozzeck or Strauss's Der Rosenkavalier have achieved. How many 20th century operas enjoy that status in any event?

The work is mid-length, timing in at around 90 minutes. It is scored for soloists, choir and a fairly large orchestra. The libretto is of a symbolic-mystical bent. A charismatic prophet-shepherd comes on the scene and King Roger's people are divided between followers of the shepherd and those who wish him punished for heresy.

There is a trial scene that ends up with the shepherd summoning his followers and going off into the night. The Queen succumbs to his influence and joins him. And on from there. It's a libretto filled with mystic ideas and ambiguity. One could say it is somewhat difficult for mainstream audiences to fathom. It accounts in part for the relative neglect the opera has received.

But on the other hand this is a very well-conceived work as music. The orchestral writing is powerful and filled with affect. The principal roles have a heroic tone to them. It is a movingly beautiful work and will appeal to those who like Ravel's "Daphne and Chloe," Strauss' most advanced operas, the orchestral music of Scriabin and perhaps a little in the way of Wagner's epic largess as well.

The performance on the DVD is quite good. The Vienna Symphony under Sir Mark Elder is ravishingly sensual or stupendously gigantic when called upon to be so. The various choral groups involved achieve a glowing sonority and give their parts all they deserve. The principal roles are handled excellently by the singers involved. Scott Hendricks as King Roger is especially effective, no mean feat when singing against the massed choral and orchestral resources that would all-but-defeat a less robust vocal instrument.

The sound is good overall. It is a live recording so on occasion the vocal protagonists can vary in balance level according to where they are on stage and the relative dynamic level of the orchestra in any given passage.

David Poultney's staging is minimalist and dramatic. The stage is set up as a sort of half amphitheatre with stepped levels occupying the entire stage. It is through very effect use of spot and overall colored lighting that moods are created and sustained. It comes off quite well.

The DVD medium is ideal for bringing the total gestalt of the opera across to the viewer-listener. You hear in vivid sound the score and its fine interpretation; you experience the starkly effective staging; and you experience the libretto in its full context. Szymanowski's King Roger lives or dies on the merits of its music. It is not completely convincing as a story-plot. Musically it is a very powerful work. I came away from it all with a much greater appreciation of Szymanowski's compositional breadth. In its own way King Roger constitutes a forgotten masterpiece of the 20th century. And this DVD production seems like an ideal way to appreciate its strengths. Recommended.
Posted by Grego Applegate Edwards at 4:25 AM