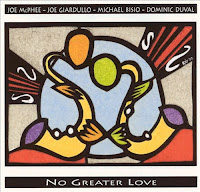 A lengthy, freely expressed, chamber jazz outing by two reeds and two basses could end up being a snore-inducing bore in the wrong hands. A muddy tangle. When the four musicians are Joe McPhee (soprano), Joe Giardullo (bass clarinet and soprano), Michael Bisio (bass) and Dominic Duval (bass), the results are not going to be anything like that. This you know if you know these players. Plus in 1999 this was a working aggregate, so they were not getting together for the first time. That is on the CD No Greater Love (CIMP 209), which I happen to be listening to lately as part of my extra-curricular enjoyment.

It's the Joe McPhee Bluette of the era, at Cadence studios in upstate New York to record an album of music of the spiritual-soul side of things. They did that. It came out as In the Spirit (CIMP 199). They in the course of making that album recorded more than they had intended, including music that was outside the concept of that album.

The other, spontaneous expressions, one spiritual, one standard and sequences of rather brilliant collective improvisations, were captured and put out as the album at hand.

Here we have inspired music making by four masters of the improvisatory arts. All four come through with improvisations worthy of their reputation. In the course of the session advantage was taken of the various combinations possible--reed solo, reed duet, reed and bass duet, one or more basses alone, all four, etc.

There is subtlety and there is excitement, structure and spontaneous freedom, tradition and innovation, things we have come to expect from the four artists and are in full abundance here. The expectations one has when two of jazz's most accomplished bassists and two of the most original and creative reedists pair together are met fully on this disk.

One for the ages? A remarkable gathering in any event.