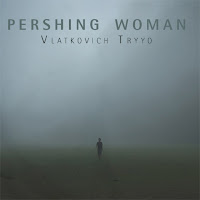 Trombone avantist Michael Vlatkovich comes through with a sterling live trio set on the recent Pershing Woman (pfMentum 071). Michael teams up with two game players for lots of kinetic fireworks on this one. Jonathan Golove's electric cello gives the band a lighter-than-air foundation that seems to free the band for a lofty flight path. He can bow with Michael's bone in heads for an interesting sound or of course pizz away like a tenor bassist. He forms a good part of the melodic-harmonic motion of the band and does it well. Damon Short swings along quite nicely throughout on drums. He engages Jonathan for rhythm propulsion and spurs on Michael and Jonathan for their forward moving solo spots.

And Michael Vlatkovich! Through his well-positioned outbopping compositions and rough and tumble trombone anarchy he maintains his stature on Pershing Woman as one of the outstanding trombonists and bandleaders active today in the new jazz.

It's an album that captures a lively gig and shows the trio in full flower. Lend an ear.