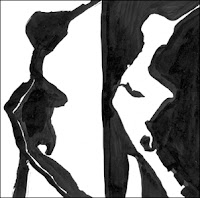 The best album that Sonny Simmons and/or Francois Tusques ever made? Near the Oasis (Improvising Beings ib10) may not be that. It is a kinetically charged meeting of the two at the 2011 Vision Fest in New York.

It starts with a kind of cosmic thing with Sonny on English Horn, Francois at the piano, and that's the finest moment of the set because it puts them both in a place they've never quite been, together or alone.

From there a remarkable look backwards with four bop standards: Monk's "Round Midnight" and "Bolivar Blues" plus the old standbys "Theme for Ernie" and "Night in Tunisia".

Bird, Monk, blues and bop, Sonny and Francois show their roots in convincing ways here. When traditionally out players tackle the older material, it can be quite interesting to hear. Sonny and Francois do most certainly NOT play rulebook bop here. It's the notes they want in there, what they hear, not just those that Bud and Bird would have played. So it has the exhilarating moments where they expand the tonality and widen the channel, so to speak.

It's a worthwhile performance, sure to appeal to Simmons and Tusques fans as something different, a one-off that may never be repeated and has its many charms.