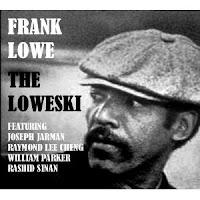 Frank Lowe's seminal Black Beings (ESP) was what turns out to be only the first part of a concert recorded in 1973. What was initially released on that LP was one of the wildest excursions into the avant jazz of the era, with Frank Lowe and Joseph Jarman breathing fire and the rest of the band stoking the flames for an extended rant that still has the capacity to excite and unsettle.

ESP has recently released The Loweski, which is the rest of that concert, almost 40 minutes worth of unreleased music.

It's the same musicians, of course. Lowe on tenor, Jarman on soprano and alto, Raymond Lee Cheng (The Wizard) on violin, William Parker on bass and Rashid Sinan on drums.

After a short solo intro by Lowe the group launches into another collective onslaught of high energy expression. This mix is different--with Lowe and Jarman coming though at somewhat lower levels and so you hear the rhythm section and Chang's violin at the front of the audio stage for a time. And they are engaged and holding forth in very good ways, so it gives you something very much worth hearing. From there Chang plays some extreme pizzicato electrified, then back to the bow. He is possessed and inspired.

After that the horns get rolling again with just the rhythm section, but again they are low in the mix and not as audible as one might expect. William Parker steps in though with his bow and does some nice things. Towards the end the saxes become more centered for a bit and then the improvisation ends with drums and Parker's bowed dirgy two-chord plus harmonics.

So in the end this is especially interesting for what you hear of Cheng, Parker and Sinan. It is less of a horn showcase. But it is still vital free jazz of the era and will be appreciated as such by those so inclined. I am very glad to have it. Black Beings is the one to start with, however, if you haven't checked that out yet.