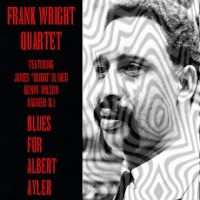 Frank Wright may not be a name that has crossed over from avant jazz circles to the general public (and how many have?) but he was a moving force on tenor from nearly the very beginning and the body of recordings he left behind still sound fresh and engaging.

And now ESP has released one we have not known of before, Blues for Albert Ayler, a long set recorded at Ali's Alley in 1977.

The band is into the moment in a good way. Rashied Ali pushes continuously with his open-form, complex freetime. He sounds very motivated. He puts the band in overdrive. James "Blood" Ulmer is in an out groove, inspired. Benny Wilson toils steadily behind the bass, giving the ground base a solid foundation while the others soar. And Frank Wright gets his tenor into the stratosphere and stays there.

This is very high-level free jazz, the recorded sound is decent and it is a very welcome addition to Frank Wright's discography. Quite worth having if you are into the avant roots.