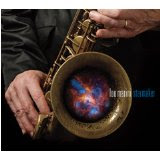 I never paid much attention to Lou Marini in the past, even though he's been pretty ubiquitous. Listening to his new solo album Starmaker (BluJazz 3394), I hear something that gets my attention. It's a straight-ahead, somewhat commercial, somewhat electric date, with some very competent sidemen and arrangements that are just fine. The tunes are interesting from a compositional standpoint.

But what is the main thing going for this is Lou Marini's playing. He's something else. He has a soulful rasp when he wants it and his lines are not at all typical, having bop-Trane and after in there in unusual ways. He sings a little but that's some band vocal stuff.

It's an album that shows you that Lou Marini is a player with a capital "p". Gil Goldstein, by the way, plays some hip things on piano too.

Now I'd like to hear Lou do an acoustic quartet session and let it all hang out!