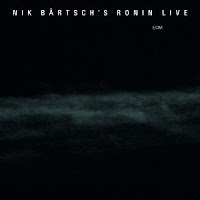 I have been following Nik Bartsch's musical development with interest. He is a kind of minimalist and his ensemble Ronin plays a music that proffers a mesmeric sort of jazz-rock. The current lineup consists of Bartsch on piano and Fender Rhodes, plus bass clarinet/alto sax, one or two electric basses, drums and percussion.

Imagine the classical minimalism of Steve Reich in his first African-influenced period, with grooved repetition and multi-stranded polyrhythms abounding, then give it Nik's own personal twist and have it performed by a jazz-rock sort of ensemble.

The ensemble has gotten fully into the total effect of this music and each instrumentalist's part within it--and created some really compelling live versions. There doesn't appear to be a lot of improvisation in this music per se, so far as I can tell, at least not in terms of a set solo routine--it's more concerned with realizing the interlocking parts and then allowing for a certain amount of improvisation within the structures realized.

But it is such a fascinating set of grooves that you don't worry so much about expectations, but sit back and let the whole matrix give you a jolt. And yes, this music is very funky in a very advanced sense.

I've been enthralled with almost every minute of this recording, from the first hearing on. If you are into advanced grooves, minimalism you can dance to, I suspect you'll feel the same way.