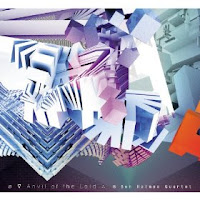 There is a subset to contemporary jazz that is avant in a slightly different way than flat-out free jazz: there is often a modern compositional bent with evolved rhythmic and harmonic complexities in the head structures that are very contrasting to the sort of symmetrical and short phrases bop favored, and tend to be more evolved than some of the fully free improvisers's setup motifs. The compositional element can often extend beyond the head format and come into play at any point in what otherwise would be the solo routines.

The music usually pulsates, but it may do so with odd-time signatures or rhythmic figures that fall between swing and rock yet have variational interest in the hands (and feet) of an imaginative drummer and a keen-sensed bassist (though the bassist does not ordinarily use his feet...). Finally there of course is room for soloing of the principal front liners.

Dave Holland's group has been exemplary for this sort of contemporary sound. But of course there are many others out there. A new, very good one is the Ben Holmes Quartet, as heard in their recording Anvil of the Lord (Skirl 020).

Ben Holmes wields the trumpet with distinction and writes the compositions, in which you can hear myriad influences, gelled together in ways that have a wholeness of style and concept.

His trumpet playing is inventive and direct toned--a little like Dave Douglas to my ears in sound and approach, but with a fluidity and sureness that points him forward. He is well served by his fellow groupmates: Curtis Hasselbring on trombone serves as a beautiful foil in the contrapuntal, two-line compositional heads, and shows good form in his soloing. The two-headed hydra of a rhythm section shows excellent teamwork. Vinnie Sperrazza sounds as creative and catalytic as he ever has and Matt Pavolka's bass is both structurally keyed to the song form and rhythmically rock solid, giving Vinnie excellent foundational support so that he can loosen up and get the variations going. Matt does interesting solo work when called upon as well.

So there you have it. An excellent effort from all concerned and a sign that Ben Holmes has arrived. I look forward to his ever-increasing presence on the scene in the coming years.