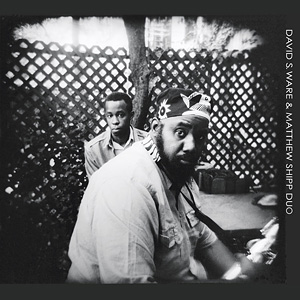 Undoubtedly no single collaborator looms quite as large in the discography of tenorist David S. Ware as pianist Matthew Shipp. He opened up the harmonic-melodic matrix for David in ways that nobody else quite did and was a catalyst for some of David's very best work. So of course it was with a sense of anticipation that I encountered the envelop that contained the previously unreleased duo of the two, Live in Sant'Anna Arresi, 2004 (AUM Fidelity DSW-ARC 02).

As Matthew Shipp notes in the liners, the duo setting differed from a typical quartet outing by the freedom it encouraged for both players to enter into open dialog not as leader and sideman but instead as two musical equals.

There is a freedom and a channeling of the free and jazz-historical continuum to be heard in lengthy developments. It is no coincidence that the set ends with a brief Ware quotation of the old "Wade in the Water" melody.  The music abstracts, deconstructs and reconstructs the spiritual and temporal phrasing of jazz tradition without letting it structure the totality of where the musical destinations lead.

And so David and Matthew let the expressive winds carry them to special testificatory territory. The two breathe-phrase as two-in-one yet never seek to repeat either what the self or the other has said in real time.

David sounds especially ebullient and fluid, a whirlwind within an improvisational vehicle headed further to its long delayed destination. Matt alternates between abstract riffing, simultaneous lining and a free comping carpet of directional warp and woof.

It was a poignant moment in time where thankfully the "tape" was rolling to capture it all faithfully. It is a tribute to what can be no more, the potent intersection of David and Matthew in an especially fruitful moment in time. And for that it is a classic free-frame expression with all the warmth, fire, and eloquence one could ask for. It reminds us how much we miss with the passing of David, but then how much remains with the continued brilliant vitality of Matthew!

This is one not to miss.