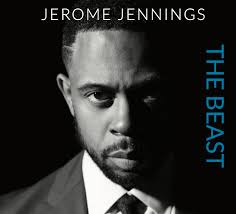 Jerome Jennings, fine post-Blakey drummer and bandleader, holds forth with a good band and compelling tunes on The Beast (IOLA). The stylistic spectrum from Hard Bop to very contemporary jazz is the order of the day. An underlying message is solidarity with Black Lives Matter, not made explicit in the music itself but present in the concluding words of the leader.

Nine numbers grace the album--"You Don't Know What Love Is" is the standard, nicely sung by Jazzmeia Horn. The rest are rousing instrumentals with Jennings ever-present as a drummer of swinging stature. Joining him are five adept jazzmasters in Sean Jones on trumpet and flugelhorn, Howard Wiley on tenor, Dion Tucker on trombone, Christian Sands on piano, and Christian McBride on bass. The rhythm section superbly sets up the drive of the music and everyone solos in world-class fashion.

Bassist Jon Burr contributes a Hard Bop gem in "Love the Drums," written especially for Jennings. It's off to the races thereafter, with four effective Jennings vehicles, Ben Webster's "Did You Call Her Today," Freddie Hubbard's "The Core" and a sparkling "Cool It Now" by Brantley and Timas.

The fit between tunes, ensemble, swing and solo work is near-perfect. It is one of the finest contemporary jazz mainstream sets I've heard in a while. Everybody deserves a brisk round of applause, leader Jennings especially.

Get into this one and you'll be hearing some of  the best today.