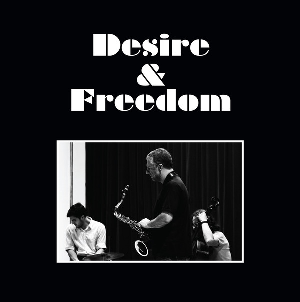 When Albert Ayler famously said that his music and by implication the free jazz of the time was "not about the notes anymore," he described an important truth and guided the unprepared listener into the thicket of tenor saxophone timbre and extended sound vocabularies. But in a way it was always about that. Just listen to Coleman Hawkins, then Lester Young. Much of what makes the two what they were was their special sound. But then of course there was always the notes, the phrasing, that equally defined an artist. Even Ayler had a noteful vocabulary that by not being central, was a more open deep structure of notefulness in itself.

So we move on to today and the new tenors out there. A significant one is surely Rodrigo Amado, who with his Motion Trio have a worthy new album out called Desire & Freedom (Not Two 946-2). It IS all about the sound that Rodrigo on tenor gets, that celloist Miguel Mira gets, that drummer Gabriel Ferrandini gets. But it is most definitely also about the notes, how to sound lengthy strings of tone and sequence that do not depend on the obvious and predictable, but rather chromatically diverge in and out of tonal centers with little repetition and continuous invention. Perhaps that is most difficult for the drummer, who on the surface has only so many surfaces, but no, Gabriel knows about the variations to be gotten by touch and micro-spacial surface differences.

So this trio has as a foundation Ferrandini's variational sonic virtuosity, its irregularity but its continuous non-pulsing soundings. Miguel Mira approaches the cello somewhere between the understructure of a free contrabassist and the stop-action distinction of a front-line collectivizer.

Then, with the three long improvisations that comprise this set, Rodrigo puts his limber and ultra-spontaneous creative inventive brilliance to the test. He puts himself on a melodic tightrope and negotiates the line he chooses to walk with risk-taking dexterity. His sound is his own, a robust tenor heartiness more in line with a Rollins than a Coltrane, but readily identified as his own sonic person.

It's a tour de force set, some of the strongest and most directionally continuous music Rodrigo and the Motion Trio have made to date. This puts them in a special zone, up there with some very heavy company. I am glad of it, but more importantly you need to get with this one if you follow free avant improv unfoldings today. It's important music!
Posted by Grego Applegate Edwards at 6:56 AM