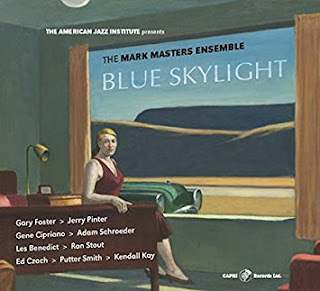 When something is as well done as the Mark Masters Ensemble's Blue Skylight (Capri 74143-2) it sticks with you. Now that I have deeply explored what is inside this album, just one look at the cover happily reminds me of it all once again, and I find the urge to put it on one more time.

It is a program of known and slightly lesser-known compositions by Charles Mingus and Gerry Mulligen, both of course known for their brilliance in scoring their own work for various sized ensembles and so a challenge to someone who seeks to do contrasting arrangements. That Mark Masters succeeds admirably is a testament to his considerable talent.

The band is a very capable 7-tet. Gary Foster is a most welcome presence on alto, especially since he does not appear on as many sessions these days as one would like. But then we get some beautiful players in Jerry Pinter on tenor and soprano and either Gene Cipriano on tenor and Adam Schroeder on baritone or Ron Stout on trumpet and Les Benedict on trombone--the aforementioned alternate presences is divided more or less evenly on the program. Then there is Ed Czach on piano, Putter Smith on a very out-front bass, and Kendall Kay on drums.

There is a tight clean sound that seems a present-day rethinking of "Birth of the Cool" or perhaps a little of the "Four Brothers" sound. And that totally fits in with the outlook of these compositional gems.

We get Mingus's "Monk. Bunk and Vice Versa," "So Long Eric," "Peggy's Blue Skylight," "Duke Ellington's Sound of Love," and "Eclipse," all well worth a fresh set of arrangements, to say the least.

Mulligen comes to the fore with new arrangements of "Out Back of the Barn," "Wallflower," "Strayhorn 2," "Apple Core," "Birds of a Feather," and "Motel."

The combination of arrangements and solos is well balanced. The compositions sing to us again with Mark Masters' singular ways.

This is music that makes ME happy. I do strongly suggest you hear this one. You'll be happy with it too, I would bet.
Posted by Grego Applegate Edwards at 7:08 AM