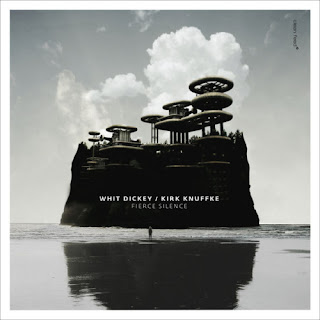 A duo of just cornet or trumpet and drums? We might recall Don Cherry and Ed Blackwell's iconic Mu duets from 1969. Now we have something altogether different, less wide-ranging but more strictly focused on free jazz per se. I speak of drummer Whit Dickey and cornet player Kirk Knuffke's Fierce Silence (Clean Feed 376).

Complete freedom and vivid aural imagination are the rules of the day on this set of ten segments. Whit made his name as the creative drummer with David W. Ware's ensemble and then Matt Shipp's trio, as well as lively dates as a leader. He is back and sounds as good as ever here. Kirk Knuffke has come to the forefront of the avant jazz world, especially in the last decade, making beautiful music with bassist-bandleader Michael Bisio among many others.

I've said this before on these pages but it bears repeating: Kirk manages to channel the history of jazz in his playing through a very classic tone, the poise of immaculately idiomatic phrasing and a creative ability that means he can be counted upon to come up with ever fresh, good ideas. That's very true on Fierce Silence.

Whit is a drummer and musical dynamo that takes the early freedom of Milford Graves and Sunny Murray and applies his own personal way to it all, building out of New York free school drum ideas and going beyond.

This album marks a very fruitful frisson of two well seasoned avant vets. There is not a note wasted. Every one counts. And the sum total of every note is some free music of the highest caliber.

Very recommended!
Posted by Grego Applegate Edwards at 6:06 AM