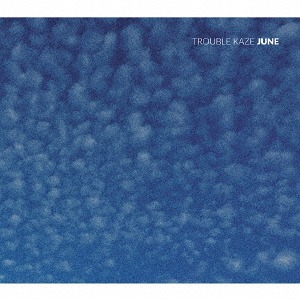 Trouble Kaze is the newly expanded edition of the group Kaze, a cooperative free improv jazz venture that includes pianist Satoko Fujii and her trumpet wielding life partner Natsuki Tamura. For this inaugural effort the band is in effect a double-trio, with two trumpets (Tamura and Christian Pruvost), two pianos (Fujii and Sophie Agnel) and two drummers (Peter Orins and Didier Lasserre).

They distinguish themselves in a sort of utra-focused, carefully considered five-part improvisation recorded live. The album is entitled June (Helix LX009) and it is a good one.

The expanded unit allows a series of double duets and six-way confluences. And so to begin we hear twin prepared pianos, twin trumpets in breathy expressions, and twin drums creating distinctive barrages. As the set proceeds we get the intermingling of the pairs and their recombinations in various foreground-background-bothground possibilities.

All six play with a sureness, an impressive authority that at no point sounds tentative, always intricately definitive, sure in their choice of timbral color, periodistic presence and note-sound nowness.

It is free music in no hurry to state it all at once, but rather to open and develop with a gradual inevitableness that is continually rewarding in what it chooses to include (and of course by that to also leave out in any given segment).

With a collective sense of instrumentation-orchestration there are dramatic event arcs, coming to a quiet peak in the two-piano expressions of part four, which we have been prepared for by definitive journeys into this clearing. It is brilliant and by a period of quietude and then the end of part five we are pleasantly satiated and satisfied, appreciative that not ALL has been said, but all that is necessary to give us Trouble Kaze's June.

It leaves me wanting more in the end, but happy also that this glimpse feels complete in itself. meted out inspiration and sound design of a high nature, a thoughtful forwardness.

June gives to us itself, the six instrumental voices interacting singularly, the group asserting its collectivity in self-less yet self-ful completeness-incompleteness.

This is a prime example of the innovative presence of Fujii, Tamura, and four extraordinarily receptive countervoices. Trouble Kaze is a kind of miracle of listening and acting, both by the performers and by you, the listener.

High improvisational inspiration, this is. Be sure and hear it repeatedly if you can. Kaze and now Trouble Kaze are a seminal group in the new improvisational fold today!