Allen Lowe, In the Diaspora of the Diaspora: Hell with an Ocean View: Down and Out DownEast 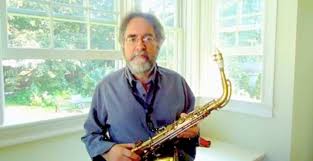 Why it has taken a while for me fully to appreciate the music of Allen Lowe is a bit of a puzzle, now that I am totally on his wavelength. Maybe because he is so prolific--the "box" set I reviewed a while back had an awful lot of music to digest and I'll admit I wrote up my review before I had spent enough time with the music to assimilate it fully. I ended up going back to it and the additional spins made it all come together for me.

So, thankfully, there is more coming out. There is another set I'll be getting to but first a single disk release, In the Diaspora of the Diaspora: Hell with an Ocean View: Down and Out Downeast (Constant Sorrow 999). I can identify with the title because I am living it, too. The world is very beautiful but nowadays very hellacious, as anyone reading this might know.

The album begins as is Allen's way with an excellent cast, Allen of course with his inimitable alto and then Nels Cline on guitar, Ray Suhy on guitar, Matthew Shipp on piano, Kevin Ray on bass, Larry Feldman on violin and mandolin, and Carolyn Castellano on drums. The "big names" give us key contributions, but then again so do the "smaller names." Allen however is the guiding force on alto that makes it all come together.

The originals are open, mostly changes-based gems that show Allen has absorbed fully the roots of avant jazz (whatever those are in their great plentitude). He has worked his way through the myriad avenues and byways, doubtless a long process that has led him to his own original path. That end discovery of his musical self after such an extensive exposure to what has been is of course not at all the norm. Not many have so fully slogged through it all as he has. It is key to his music, that working through and beyond.

Each piece is memorable in form and melodic-harmonic movement. They open the way to improvisations of stature.

This is a great place to start if you do not know Allen's music, and you should. It is an additional and very rewarding temporary resting point if you already know him. Either way the music is vital, jazz of the most developed sort,  reaching some of the highest planes of attainment on the scene today.

Can you tell I recommend this unreservedly? I do.
Posted by Grego Applegate Edwards at 7:11 AM