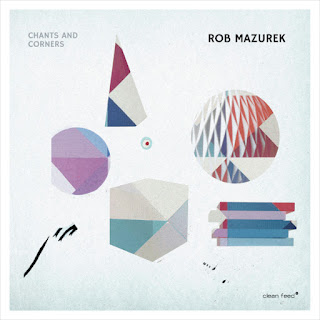 The music of Rob Mazurek in the past decade has been remarkable. His use of electronics in a thoroughly exciting free jazz medium, his cornet, his role as bandleader, all stands out in my mind as high points in the later period of avant expression.

And now we have a further example of his, another clear sign that the momentum of his most creative period to date is in no way at an ebb. The new one is entitled Chants and Corners (Clean Feed 416). It incorporates deftly electronics manned by Mazurek, Guilherme Granado and Thomas Rohrer. Mazurek is also on cornet and on piano for one track, Granado is also on keys, Rohrer on rabeca, flutes and soprano. Then there is Mauricio Takara on drums plus Philip Somervell on piano and prepared piano. The totality of the ensemble is as primary as the quality of the improvisations. It is a joyous noise we hear.

To parse each part in a description is perhaps to miss the point? On the other hand one cannot help but appreciate Rob's stunning cornet work. Everybody does the right thing, though. Giulherme's and Philip's keys-piano work is rompingly appropriate. Mauricio drums up a froth. And Thomas adds significantly on reeds. But it is all this within an electronic wash that puts things on a collectively higher plane.

It is nothing less than what one would expect from Mazurek at this stage. But then it is also more, a further development, a remarkable fluency of free musical expression taken another step forward.