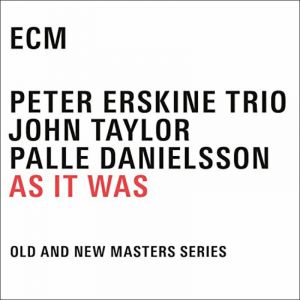 In the maddening jumble of my life as it happens to be right now, I've had a release ready for review for several months. Why I am only getting to it now has nothing to do with the music and its quality. It has more to do with an unceasing serendipity that has at times sidetracked my ordered intentions.

So we plunge in, or rather I do. You are the readers. It is up to me to speak. I hope of course you will read. The Peter Erskine Trio with John Taylor on piano and Palle Danielsson on bass had four albums come out on ECM, 1992-1997: "You Never Know," "As It Is," "Time Being," and "Juni."  In the interim a good deal of time and change has effected us and our world. John Taylor is no more. We have been flung into the future willy nilly and it is not what we expected. Meanwhile the ECM folks have seen fit to re-release all four albums as a box set retrospective entitled As It Was (ECM 2490-93).

And so the music emerges once again for us to reconsider. I will now admit to you that the period of 1992 through 1997 was alternatively one of poverty and then incredibly dense activity for me. I had almost no time to follow what was coming out, and so I missed all four of these albums.

The result is that this retrospective is to me something totally new. In the end it should make no difference. What is worth hearing or rehearing now is a matter of worth TO US who still stand (or sit) in the ever-passing world of music available for the hearing. Either the music speaks to us right now or does not.

As It Was most certainly DOES speak to me at this waystation of my life. I have come to appreciate the late John Taylor as a pianist of world-class stature on the contemporary jazz scene. If I came to him via several of his own albums instead of this trio, it does not matter. Similarly of course both Palle Danielssohn and Peter Erskine I have long appreciated for their superb artistry.

These four albums today sound as fresh and current as anything coming out on ECM now. Taylor provided most of the compositions, Danielsson others and a few covers are a part of the set.

What endures and catches our ears is the enormously subtle interplay of the three. They interact in full complementary synch, with a beautifully spacious balladic sprawl or a sophisticated swinging pulse.

And as you listen you feel that the ECM piano trio legacy that has been so much a part of the label's contemporary presence is notably represented by these sides. There is harmonic lush expansion, there is a compositional rootedness and an introspective-turned-sometimes-outward feel that makes all this music as capacious (roomy) as it is understated and profound.

Any contemporary jazz piano trio adept will find in this set much to explore and grow into. It is not a loud music, but it is originally expressive and consistently so. Listen if you can!
Posted by Grego Applegate Edwards at 6:47 AM