Benjamin Herman and the Special Edition of Hypochristmastreefuzz 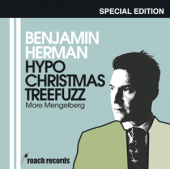 Benjamin Herman is a gas. Before you start trying to fill helium balloons with him, mind that he is a MUSICAL gas.

He has a tribute disk to the music of Misha Mengelberg, Hypochristmastreefuzz ((Dox 096), the original version of which was released in 2008. The Special Edition is a two-CD set that includes a live disk. It's all good.

Mr. Herman's alto sax is searing throughout. The music has that eccentric exuberance that Misha has always been known for. The studio date has a five-piece band plus vocalist and three-person "choir." The live disk pairs down to a quartet. The rhythm section cooks, Anton Goudsmit plays a very lively in & out electric guitar, and things go from mad bop to tongue-in-cheek secret agent instrumental, with much in between.

This is wonderful music. It gives you the wild and wooly, everything goes kind of Netherlandish jazz that when done well is so contagiously joyful. It is done well.
Posted by Grego Applegate Edwards at 4:02 AM