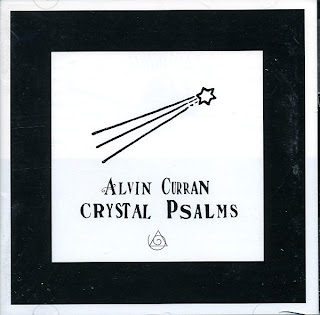 I wont re-rehearse the argument here. I will however talk about one of his gems, the 1988 work for multiple choruses, instrumentalists and pre-recorded tape, Crystal Psalms, which is available if you look for it on a New Albion CD release (NA067CD).

The piece was first performed to commemorate the 50th anniversary of Kristallnacht, a horrifying night in 1938 when the Nazis began the pogram-holicaustic violence against Jews in (deadly) earnest.

Curran's work is disturbing, of course. How could it not be? But it is much more than that. The work was designed to be broadcast live in most of the major European cities. Six radio stations scattered across Europe handled the simultaneous six-way performance of the piece, each with a moderate-sized chorus, a string or wind quartet and an accordionist. None of the groups could hear what the others were doing, but the realization was coordinated (via a time track) so that all six musical groups played their parts in synch. Complementing these musical ensembles were taped sounds of glass shattering, Cantors, a shofar horn, praying at the wailing wall, percussion barrages and other evocative sounds. Radio audiences heard a mix of all six audio feeds which represented the score in its totality.

It is a long, sprawlingly gigantic, enormously moving work. It should not be missed.
Posted by Grego Applegate Edwards at 4:25 AM