Shawn Bell and His Hard-Bopping Bone: "Things Yet Unknown" 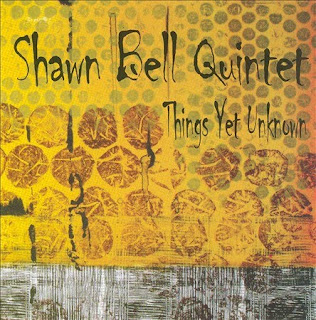 You don't need to be re-told this, but it is OK to revisit an historically older style if you are sincere, dedicated to it, have something to say in its idiom and do it convincingly. That would pretty much sum up Shawn Bell [on his recent Things Yet Unknown (self-released) album], his trombone, his compositions, his band and the Blue Note Classic Hard-Bop sound. It's a sextet with trombone, trumpet, fluegelhorn, piano, bass and drums. The three-horn front line lends itself to those classic voicings from Dameron through to Shorter-Hubbard-Morgan-Fuller-Mobley and their various combinatory groupings.

This has that sound and it has it in more than a rote sense. The band plays with fire and conviction (and with cool as warranted), all of them. Shawn Bell gets that JJ-Fuller righteous brightness to his tone that is very nice to hear. The originals go right into the center of the style. The other soloists are convincing too, as is the rhythm section.

You don't feel as you listen to the album that anything has been lost or watered down, though I do miss Philly Joe bashing back there! It's a loving immersion in a wonderful style. Dig it if you dare!
Posted by Grego Applegate Edwards at 4:26 AM