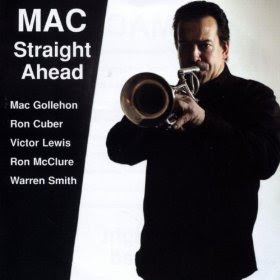 Trumpeter-trombonist-arranger Mac Gollehon has done something that is far from easy to pull off. He's created big band charts and then realized all the trumpet and trombone parts by overdubbing (except for the bass trombone, which is in the capable hands of Sam Burtis). He's then fleshed out the rest of the group with some notably great players--Victor Lewis, Warren Smith, Ronny Cuber, Ron McClure (where has he been?) and others.

The result is a swinging old-school big band date aptly titled Straight Ahead (American Showcase). The arrangements are in the idiom, and there are choice chestnuts like "Lush Life," "Round Midnight" and "Goodbye Pork Pie Hat," as well as originals.

Ron Cuber plays some absolutely devastating bop baritone, almost of the bar-walking sort. Mac is convincing as a trombone soloist and his trumpet spots sometimes go for the high-notes a la Maynard Ferguson but in general stay close to the pocket.

It's quite a feat, but more importantly it's a lively, swinging big band date that could have been made in 1962. Yeah, it's good and Mr. Cuber kicks some serious butt here.
Posted by Grego Applegate Edwards at 4:32 AM