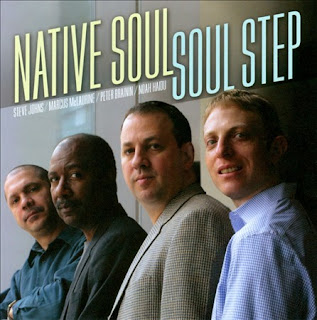 A soulful way is what the Native Soul quartet brings to the table. Their second release Soul Step (Talking Drum 2010) gives the listener a generous 70 minutes of originals and standards that cover a kind of updated approach to the funk (in the Horace Silver sense) and late hard bop current as part of the scene in the late '60s-early '70s. In there too is a little of the electricity of the earthy forms of fusion from that time and a little of the Blue Note Tyner et al swing-and-blow-against-piano-riffs style. It's a world of samba, jazz waltz, all-out funk rootsyness.

Peter Branin (tenor sax, soprano, flute) has a sort of early middle Shorter-channels-Trane sound much of the time. Pianist Noah Haidu gets the Tyner-meets-Cedar Walton elementality going and can also hit the hard bop route with that "soul" so present in the group name/album name.

The rhythm section of Marcus McLaurine, bass, and Steve Johns, drums, does what is needed at the right times to get it all rolling.

The only thing I might say that is less than positive, is that I would have liked this disk even more if the solos took a little more chances. They are firmly in the realm of what the "proper" pressure points, the right notes, the amount of push should be in this kind of music. My ears hear opportunities to take on more fire, to take it out a little more. They no doubt do not wish to do that, and so instead of a Lee Morgan at the Lighthouse full-burn you get a slightly less evolved form of the music. No doubt they hang back slightly because that's what they hear and that's how they wish to communicate with the listeners. I am sure that the path they have chosen will make them acceptable to the more timid jazz radioplay formats. And if that's what they feel, all the better for them.

It's very well done. It doesn't hit as hard, and it doesn't hit me as hard as I would like. Others may find it more agreeable. This one is for them.
Posted by Grego Applegate Edwards at 4:24 AM