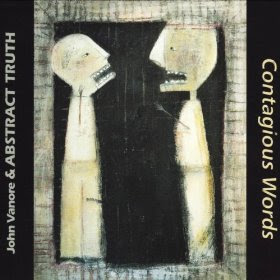 John Vanore's big band Abstract Truth comes at you in subtle ways on their third CD Contagious Words (Acoustical Concepts 44). It's music that uses all the mainstream notes, but combines them often in ways that are different. It's a 12-person ensemble that has been hanging in since 1981. As a trumpet player himself, John has fashioned a group with a lot of brass power, John plus 3-5 others on trumpet-fluegel, then French horn and two trombones. They are augmented by two reeds. So the front line has a unique sound--and they are a terrific blend I might add. Guitar, bass and drums form the rhythm team, augmented by piano on some of the numbers.

The charts are mostly Vanore originals. And they shine. Soloists are featured now and again and do a good job of it. The Abstract Truth on the surface of things could be lumped in with other bands that more or less have become a postscript to the Jones-Lewis-Nelson sound. But it's the ensemble the way John configures it and the twists and turns he throws at us that transforms it all into something original, something of interest in its own right.

This is a band that has paid its dues and overcome the many obstacles to keeping a big band going in these tough times. And they have not just survived. They should be heard. Recommended listening.
Posted by Grego Applegate Edwards at 5:15 AM