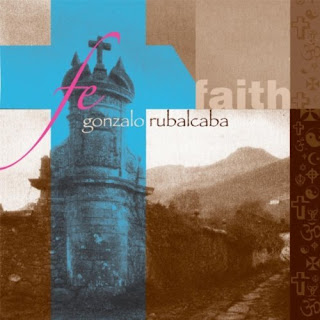 Anyone who has followed the career of Cuba's pianistic dynamo Gonzalo Rubalcaba no doubt has some favorite recordings they especially like of his. Since his wider exposure as an artist to the world there have been many very good and some great ones. But to my knowledge there has been nothing that compares with his recent CD Faith (5 Pasion).

It's solo piano all the way. It is a very intimate performance. You feel like you have dropped in on Rubalcaba at his home as he is in the middle of an inspired performance with no thought of an audience. It's almost as if he is playing for himself, expressing something rather deep and almost private. He engages jazz classics, his own pieces and sheer improvisations, passages inspired by John Coltrane and some attention to his Cuban roots, though in a more abstracted way than was typically the case in some of his earlier work. The sheer liberation of a solo performance and his increasing artistic maturity bring out a side of Rubalcaba not as often seen in his recorded opus. That is, a Rubalcaba that uses his tremendous inventive facility and imagination to search within himself, so to speak.

This is a Rubalcaba that engaes the whole of his musical experience and transforms it into his personal impression of what it all means. A summing up. The title Faith is not some catchy marketing sort of thing. Because the theme as Gonzalo states in the liner notes is a kind of exploration of how people of whatever religious or belief-system persuasion rely upon their faith to get them through difficult times.

It is a very moving performance, a remarkable piece of pianism, a heart-felt searching into musical tone as an expression of something much larger than our petty everyday concerns. Beautiful!
Posted by Grego Applegate Edwards at 5:30 AM