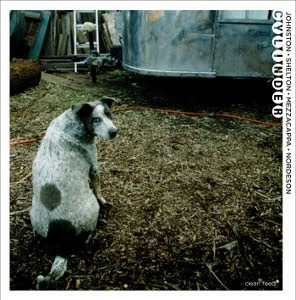 We met up with bassist Lisa Mezzacappa and her notable first album on the Gapplegate Guitar and Bass Blog (see link on this page). We cross paths with her again today, this time with the group Cylinder (Clean Feed 219). This, as the liner notes tell us, is a San Francisco-based cooperative group. The players share the composition duties, and the compositions form interesting and substantial frameworks for the freestyle improvisations on the album. It's a well-matched group of players. Darren Johnston plays a trumpet that has personality and imagination. He is a definite voice in development. Aram Shelton, now in Frisco by way of Chicago, plays alto, bass clarinet and clarinet with a wryness and large ears. Lisa is fully grounded on her instrument and bows or pizzes in ways that make one listen. Kjell Nordeson plies the drums freely and swingingly, depending.

A four-way dialog ensues throughout, which the compositions tend to encourage in the main. It comes out of their truly cooperative stance at any rate. This is "free" music but not primarily "energy" music so much, though there are moments. The improvisations tend to be somewhat more temperate rather than hotter; though there is fire, just not a great deal of the ecstatic rafter-raising some groups are known for. That is of course not necessarily a bad thing. In going in a kind of melody-line intertwining direction, the emphasis is more on the notes themselves than it is on the timbres. They are captured well on this disk and they come through with music that holds my interest throughout.

Recommended.
Posted by Grego Applegate Edwards at 5:30 AM