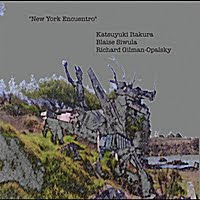 Now that what was once called the "new thing" is nearly 50 years young, we have a chance to assess what has gone on so far. Not today, however, since as I write this New Jersey is headed toward 100-plus-degree weather and my office is rapidly becoming an oven with yours truly as the tuna casserole. Nevertheless there are substyles in "free" improv that are well marked out and players are working within the various parameters with increasing economy of expression and a kind of certainty years of experimentation and musically genetic drift have made possible.

The trio of Katsuyuki Itakura, piano, Blaise Siwula, alto and tenor saxes, and Richard Gilman-Opalsky on drums serves as a good example. New York Encuentro (No Frills Music 002) finds them in a free-blowing set that has the consistency of music by players who know where they are coming from, know where they want to be, and then get there.

Itakura comes out of the Cecil Taylor school of pianistic all-overness. He's quite good at keeping the lines and clusters coming. Gilman-Opalsky has the Sunny Murray-and-after freetime drumming down and interacts well with the others. Then there is Blaise Siwula. He has a way of his own that relates to what has gone before but does so in ways that are endlessly inventive. It's not so much a timbral sound sculpting that goes on with Blaise on this set, though he does of course have a sound. It's the way he keeps coming up with lines of interest, setting up a dialog especially with the piano, laying out line after line of musical improvisation with a lucidity of someone who knows what he is about...that is what makes New York Encuentro music well worth hearing.
Posted by Grego Applegate Edwards at 5:13 AM