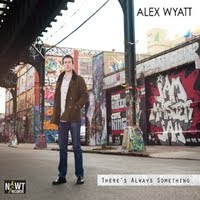 It's a set of players that have the subtle finesse and style to fit the pieces, which are new jazz mainstream--or in other words, the music is progressive-acoustic, well put-together, and the players know what to do. Alex's rhythmic sensibilities come into play in the compositions and in the grooves that weave around them. There are kicks and other rhythmic devices that give the music a jolt and show off Wyatt's fine drumming. But the melodic-harmonic content of the numbers is also compelling, with some nice twists.

I like Wilson's stylistically encompassing tenor. It compliments Yamamoto's contemporary stance nicely. Both Ruggiero and Fox weave some very attractive lines. Tordini's bass playing is distinctive enough that you can listen to what he's doing directly and get something out of it on its own, but of course what he's doing also fits in well with the music at hand.

Everybody sounds good and the tunes are quite interesting and unpredictable. It's an album you need to listen to a few times to get how nice it all is. Then you are there. I was. Thank you Alex.

Posted by Grego Applegate Edwards at 6:27 AM