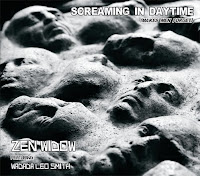 Wadada Leo Smith has been on a roll lately, there is no doubt. His recordings as leader, composer, trumpet master have been some of the most important releases of the last several years. And now he makes a rare appearance as sideman, in great form, with the group Zen Widow.

It's a varied offering of adventuresome new music-avant jazz that gives plenty of opportunity for all to express themselves freely, yet has a compositional and interactional program that keeps the music moving in the best ways. The members of Zen Widow make their kinetic improvisations speak, as does Wadada, as one comes to expect of course.

This is carefully conjured, serious new music. It works on all levels. Highly recommended.