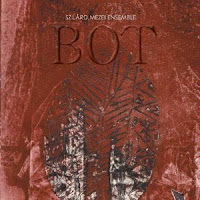 After a bit of a break it's time today to look at the last in the batch of Szilard Mezei recordings on Not Two Records that I have been covering of the past few months. It is BOT (Not Two 818-2), one of Szilard's most ambitious offerings. Here we are treated to two full CDs of music recorded live in 2004.

It's a 10-member ensemble playing Mezei compositions and freely improvising around them. The band has a vibrant color, partly due to Mezei's writing/arranging, partly due to the instrumentation: oboe, bass clarinet/clarinet/alto, two trumpets, trombone, tuba, viola (Mezei), cello, doublebass and drums. So there is a potential contrast between and confluence of winds, brass, strings and percussion that Mezei makes use of in various creative ways as well as breaking out parts of sections to work together during solos and elsewise.

There is a lot of music to be heard, all of it worthwhile. The compositional/improvisational elements balance well throughout and the rhythmic feels vary from free to swinging and things in between.

This is/was a band that could and did make a statement via Mezei's compositional brilliance. It is a set filled with originality and excitement. I most certainly recommend it.