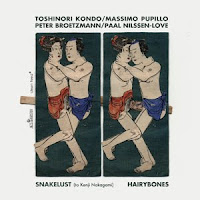 Some music drives with such a singular force that it totally occupies the space it is in. There is nothing but the music at that moment and you either surrender to it and let it wash over you like a kind of baptism or you leave the space and go it alone.

That's the kind of music to be had in Hairybones' single 53-minute rout Snakelust (Clean Feed 252). It's the band live at Jazz em Agosto, Lisbon, last year and they are most definitely cranked for this set. Hairybones is the irrepressable Peter Broetzman on tenor, alto, etc.; Toshinori Kondo on trumpet; Massimo Pupillo on electric bass; and Paal Nilssen-Love on drums. Now that's a formidable lineup.

The effects and volume element of Massimo's bass and the electronics-trumpet of Toshinori gives the band an electricity that seems to bring out some harder playing from everybody. Paal is demonic, Peter, never the shy violet, is strongly possessed by the free-energy spirit here, Massimo does some very effective bass thundering, and Toshinori screams, wails and plunges into an aesthetic abyss for some of his best playing on disk.

There are times when the intensity reaches the level of Ascension and even beyond. Other times they explore less dense territory. They never flag nor do they play a single unfelt note, so far as I can hear.

I wont lie to you and say that this CD will convert those who dislike the free-energy-maelstrom sort of onslaught. I doubt that it will. It is a good one for somebody who knows nothing of this kind of music and wants to be blown away. Broetzmann fans and those who seek out the heat of out music will revel in it.