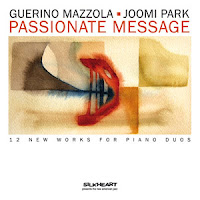 A most interesting and unusual project stands before us today. Pianists Guerino Mazzola and Joomi Park joined together to produce the recording Passionate Message: 12 New Works for Piano Duo (Silkheart 159).

The idea behind the meeting was a good one. The two artists have very different approaches, Mazzola favoring a free jazz improvisational stance, Park in the new music, contemporary avant classical composition-performance-improvisation zone. The idea was to both underscore the differences and to find a common ground in a series of improvisations.

And so there resulted four "series" of interchanges, involving statements of theme and improvisation by Park alone, then Mazzola alone, then the two together. The material ranges from more or less fully realized compositions ("Black Summer") to harmonic-melodic takes on standards (the Beatles' "Yesterday").

It is music that catapults back and forth between the two stylistic zones, then finds various forms and degrees of improvisational syntheses in the two-piano meetings.

It's frankly experimental and creative rather than some polished end-product, but that does not mean that the music is a throw-off or merely some gestural act. The results are fascinating, varied, vitally alive. It is music to explore on as deep a level as you wish, for there is much there and yet it is easily appreciated on the immediate level as well. What emerges is a complex double-portrait of two artists and two styles caught in the process of motion. You should hear it.