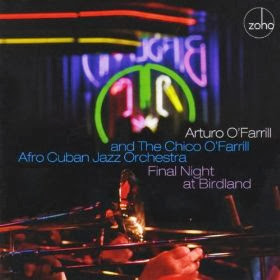 Chico O'Farrill of course was a prime moving force on the Latin Jazz scene for many years, a great composer, arranger and big band leader. With his passing the big band he kept in top form for long runs in New York clubs, the Chico O'Farrill Afro-Cuban Jazz Orchestra, was taken over by his son Arturo. For fourteen years the band held forth at the reconstituted Birdland on Monday nights.

As Arturo recounts in the liners, the pressure of keeping a crack big band going and at the same time forwarding his own bands and music became too much, so on July 16, 2011 the band played its last night at the club. Fortunately for us the recording equipment was running that evening, preserving in all its splendor the Final Night at Birdland (Zoho 201311).

Everybody is in top form, the charts include many classic Chico numbers and a moving tribute-piece by Arturo, and the recording has presence and grit.

All I can say is that this recording gives you a hell of a good look at why Chico was something else, and is a testiment to the band and its last ten years under the leadership of Arturo as well. If you've been into Chico it is an affirmation, if not it's a great introduction.

That Latin-Jazz lives and thrives today has much to do with the O'Farrills, past and present. Play on players, listen on listeners!!