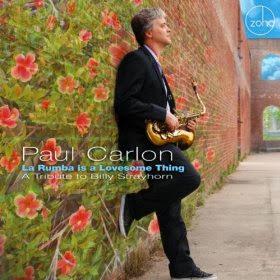 Today, Latin jazz of a particular sort. It's tenor, soprano, flute-man Paul Carlon with a crack Latin big band doing Carlon arrangements of the music of Billy Strayhorn. La Rumba is a Lovesome Thing (Zoho 201309) gives you some excellent rumba-ed, Latinized Strayhorn, really hip arrangements of Billy works and a few he did in collaboration with the Duke, even an ear-opening version of the wildly modern "Tonk," originally a piano duet by the two.

There is room for some good soloing from Carlon and others and the Strayhorn gems are pretty much all here. It will get you off of your seat and it will do it in very cool ways. Oye!