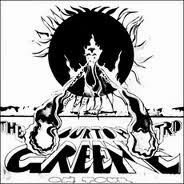 Burton Greene deserves to be heard, both in terms of what he is doing now and as a pioneering pianist in the early "New Thing" era. His second album for ESP, the Burton Greene Trio On Tour (ESP 1074) is out on CD as part of ESP's anniversary commemoration, so here's a chance to check out some more from the early days.

It was recorded as part of the ESP New York State College tour that took place in the spring of 1966. I had the original LP back a little after its release but it is if I am hearing it for the first time now. And I find it intriguing.

The trio is notable for the presence of drummer Shelly Rusten, who didn't get a lot of exposure in terms of recordings in those days but had his own way. He plays "free" with a different approach than Sunny Murray or Barry Altschul did then. It's a lot of the full drum set in a virtuoso way and there is somewhat less of the sort of pulled-apart abstraction of "playing time" that you'd often get with Sunny or Barry. At least that's the impression I get listening. It makes the trio go in slightly different directions. Steve Tintweiss is on bass and plays in his own open-ended fashion as he did so effectively for others as well.

Burton Greene is his robust early self, playing inside the piano, hammering clusters, doing his all-over style and playing along with the other sequences one somewhat atypical number that starts with a more harmonically oriented tonal base than was the case with most of the free-compositional jumping-off platforms on the early recordings. But otherwise this is pretty firmly rooted in the free-out zone as you would expect.

It's an adventure and another important documentation of those first days of free jazz. It may not be Burton Greene's best album from the era but it's filled with some very bright moments and is a must-have for those who want to get a sense for the open possibilities available to the new thing then. It's been very hard to find in recent years so grab it now!