David Buchbinder, Walk to the Sea 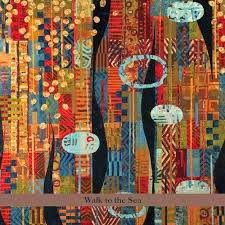 Where else but on Tzadik would you find such effective combinations of the Jewish Tinge and....anything and everything? That's a rhetorical question. The new David Buchbinder album that puts together Jewish and Cuban elements in collaboration with pianist Hilario Duran continues where Odessa/Havana (2007) left off, and yes, it's another Tzadik original. Walk to the Sea (Tzadik 8177) gives us a firey, large band out of Canada, fine singers with a Landino influence, hip soloing from trumpeter Buchbinder, Hilario Duran on piano, and some other heavyweights in the band. The group is tight and on a roll, if it's possible to mix such metaphors. It's the truth.

The charts are really something else and the band nails them. The first album succeeded nicely. This one triumphs! The truth is that a Jewish tonality and a Latin groove work perfectly in tandem--when Buchbinder and Duran put the two together. It's music of a progressive sort, too. The lines are hot, solos supercharged, and new music is made.

This is a hell of a disk!