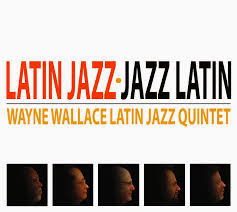 When I was a Sophomore in High School I was assigned a rookie English teacher who began the first class with "I am so-and-so, I graduated from so-and-so university and I like girls!" Now of all the things to start with, that probably wasn't it. We took it the wrong way and he may well have meant it the wrong way but either way he was off to a bad start. So when I say I like something I sometimes remember that teacher and how what you like may be best repressed or at best may be irrelevant.

However when I say "I like Latin jazz", I feel it is entirely appropriate. It's the truth. And because I do, I immediately responded to the album Latin Jazz-Jazz Latin (Patois 014) by the Wayne Wallace Latin Jazz Quintet. The title is the right one, because Maestro Wallace and the band lead us through some jazz standards done Latin style and then through some Latin material done with a good Latin jazz feeling.

Wayne Wallace plays in a hot, extroverted trombone style that is virtually indispensable for this music. He is especially good at it, too. There are plenty of solo opportunities for the band members and the special guests and that is as you'd hope. The arrangements are very hip, exciting, hot. It's Bay Area Latin--which as we saw a few weeks ago with Salsa de la Bahia, has had more of a jazz component than not over the years. But Wayne is tops there, virtually speaking. And this album gives you the why. There's his quintet, who are absorbed equally in modern jazz expression and Latin groove. Along with Wayne we have Murray Lowe doing the Latin and the jazz thing on piano, David Belove, a very nimble and hip electric bassist, and the rhythm team of Colin Douglas on drums and Michael Spiro on percussion, doing what is key and doing it with fire.

Add to that a bit of overdubbing and a set of guest artists that build the sound up to large-band size when needed. More bones from Wayne, trumpets, Pete Escovedo on timbales, plus for Cuban traditional authenticity, violins and flutes. Then there are four singers to give that vocal thing the punch it needs, when needed.

Maybe 20 years ago if somebody told you they were going to do a Latin jazz version of "Giant Steps", you would not think it could be done. Wayne does it here and it's ultra-hip, which only goes to show you how well-endowed the band is, but also how what once was considered impossible, even dangerous, now has entered our playing and listening beings as what we can do and hear in the normative sense. Wayne does not do it any humdrum everyday way, far from it, but you get the idea, I hope.

The whole set is filled with Latin and jazz goodies executed with heat, passion and soul.

If you, like I, "like" Latin jazz this is your album. It's as hip as anybody and it has that total groove going! Get in and ring in the new year with killer tracks.