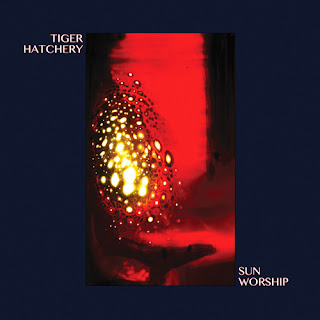 ESP Records made its mark in part as the label that dared cover free-jazz artists (circa 1965) on the fringe when almost nobody else was doing so. Their catalog of releases in that decade reads nearly like a who-is-who of the genre. In their 50th year they remind us that free music is by no means only a thing of the past with a release by Chicago trio Tiger Hatchery, Sun Worship (ESP 5003).

The press sheet mentions Peter Brotzmann and Albert Ayler as precursors to what the trio is doing, and I would most certainly concur. It's outside intensity all the way, for sure, and so that fits. Mike Forbes incants on various members of the sax family with an in-your-face insouciance that you will want to pay attention to, since this is no background music. Ben Billington on drums is a dynamo in the way you might expect. He adds considerably to the level of power here. But it is bassist Andrew Scott Young who puts it over the top and gives this trio an almost rock push. He is all over the place, kicking the living H out of the proceedings in ways that make me listen to what he's doing. He has a kind of traditional arco ESP bag which you can hear, but the pizzicato is devastatingly strong. He is either close miked or plugged in, and at times sounds like he is playing an electric, but either way he brings up the bottom with fire.

Well, so this is impressive free mayhem. Certainly one of the stronger, most mayhemishian free jazz release this year. So if that motors you you will not go wrong here! You won't need to have a dental hygienist clean your teeth if you play this one a couple of times at full volume. But your neighbors might give you some odd looks later, too. That's a given.