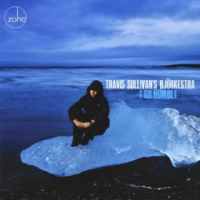 I can think of examples where a cross-fertilization of musical genres goes flat. It used to be more common, when the musical-cultural world was changing and there were odd overlaps. Andy Williams sings the "Fish Cheer"? Nothing quite that bad. "The Hollyridge Strings Play the Beatles" was one project that probably never should have happened, although it would no doubt be funny to hear now.

Because of all that I will admit I had misgivings when I put on Travis Sullivan's Bjorkestra's I Go Humble (Zoho 201312). It's the songs of Bjork arranged for big band and vocalist. I expected the worst. I was wrong.

It turns out that the good sense of Travis Sullivan in the way he arranged the songs carries the day, along with the fine musicianship involved. We have singer Becca Stevens doing the vocals. That's one key element. She sings with the sort of feeling and power that makes her voice Bjork-like without being a straight copy. She is very good. Then the big band is a well-rehearsed and talented bunch. And the arrangements somehow manage to keep the music faithful to Bjork while adding a straight-ahead contemporary big band flourish that works completely.

Partially perhaps it's because Bjork's vocal parts set up a tonality that is potentially wide-open. And there is always space over, under, around or between the melody line, so that Sullivan can do things with her music that might not have been possible with a less innovative melodist. Nevertheless it is to Sullivan's credit that it all comes together so well.

There are some Bjork chestnuts of course. All the songs Sullivan chose to arrange keep a balance between band and original melody line. They do it so well that I was surprised to be completely taken with it all. It is excellent!