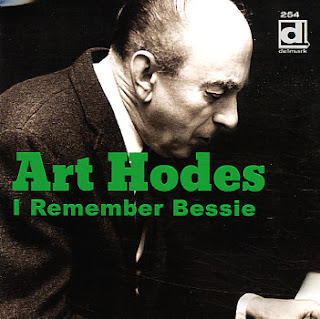 Chicago-based pianist Art Hodes (1904-1993) may not be remembered as much today as he deserves but he left behind a legacy of traditional jazz on disk for labels like Blue Note and Delmark that bear hearing again and again. One that most of us missed was recorded in 1976 and came out on the obscure Euphonic Records at the time. Most fittingly Delmark has re-released it. I Remember Bessie (Delmark 254) is with us again and it is a beautiful set of solo piano renditions of songs associated with the great Bessie Smith.

If you've listened to Bessie in any depth, along with her contemporaries Ida Cox and Ma Rainey for example, you'll note a style of piano playing in the accompaniment which is not so much filled with the oom-pah of stride as something else, syncopated and melodious, an early jazz-blues style. Such artists as Fletcher Henderson and Clarence Williams played differently in the blues vocal setting. And Art Hodes was there, too.

What I Remember Bessie gives us is 17 slabs of pure Art as blues accompanist--but in this case accompanying himself, instrumental inside of instrumental. There's much to love here, especially if you dig Bessie. "Cake Walkin' Babies from Home," "You've Been A Good Ole Wagon," "After You've Gone," those tunes that Bessie nailed once and for all. They are here.

But more than that it's a tribute to Art and his way with that style. He still had it in 1976 and gives us a focused look at what it was all about.

Essential listening for the history of piano in jazz. And lots of fun!