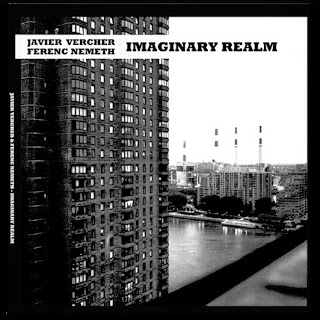 It should come as no surprise to those that follow the contemporary jazz world that there are talented players out there who one has not heard before, that there are continual discovery situations one comes up against. The sound of surprise is also the sound of previously undiscovered sound-makers, some of them really quite good.

That pretty much sizes up my reaction to the new album by Javier Vercher and Ferenc Nemeth, Imaginary Realm (Dreamers Collective 1003). These are two players, tenor saxist and drummer, respectively, who have been paying dues in New York and playing together for some time in the process. Their first album came out in 2007. This is their second, for this outing teaming up at key points on the album with pianist David Kikoski.

The set played on this disk is evocative, free-wheeling and free but also at times with implied harmonic reference points in a tonal-pivotal realm. These are open-form compositions, originals, with Vercher sometimes following a chromatic path similar in direction to such post-Trane luminaries as Liebman and Bergonzi but taking it to his own personal space. Kikoski grounds much of the proceedings in his own harmonically sophisticated world, which goes well with Vercher's outlook. Ferenc Nemeth plays some actively freebased and also implicitly or explicitly swinging drums throughout, with skill and big ears. There are moments of quiet ambience, especially when Javier and Ferenc go it alone. But the open-air sound of those moments contrast nicely with more earthy explorations.