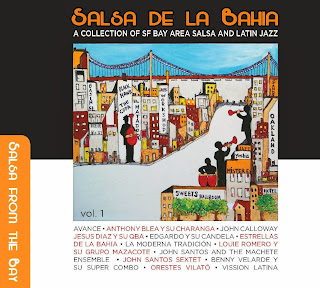 Salsa and Latin jazz from San Francisco? I'll admit that up until now, I've known nothing about it. With the two-CD set Salsa de la Bahia (Patois 015) I now know. I now know what a vibrant thing that is.

Ever since my older brother moved to Puerto Rico and began sending me some records when I was a young adolescent I have been a huge admirer of Salsa. A later visit to Puerto Rico only confirmed it. And of course living around New York City meant that I could find more records and keep my interest alive. But of the SF scene I have not had the opportunity to know the first thing.

This anthology convinces me that there is great music going on there. There are 22 cuts by people I don't know. It all began in a club in SF called Cesar's Latin Palace, opened in 1968 by pianist Cesar Ascarrunz, who for ten years lead a heavily jazz inflected Salsa outfit there. It included the likes of Joe Henderson, Luis Gasca and Julian Preister! From there the scene burgeoned.

The anthology surveys the scene today with some beautiful music that has a healthy jazz as well as Salsa component. It's music of pure pleasure, with everything you come to the music for--including great horn sections, kicking Latin percussion, soloists and vocals of distinction! Yeah!