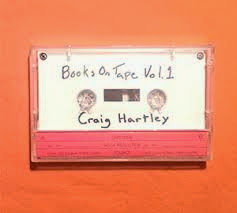 A title that is a kind of spoof starts off this review. Pianist Craig Hartley has called his recent album Books On Tape, Vol. 1 (Self-Released) but neither is it "on tape" nor is it a book. Craig Hartley instead gives us a full set of his piano, his trio and a few guests dropping in for a few cuts.

Craig explains in the liners that the compositions (eight in all plus one standard) came in some way out of his life experiences, so in that sense this is like a book. It captures some of Craig's life through his music. On the other hand there is a piece called "Books On Tape" to be found on the disk. Craig explains that the piece was inspired by spending many hours in the Yale practice rooms and how much different music one could hear simultaneously in the background while practicing there.

In any case Craig Hartley plays in a bop-and-after zone. He is a changes-oriented player, I won't say in the manner of Bill Evans because Hartley has an improvisatory originality-in-tradition that has something to do with Evans and the harmonically rich invention that surrounds his way, but there is also an articulate after-bop lining quality that Craig has that is original in its very swinging fashion--that looks to bop-liner right-hand-horn pianists (which of course Evans was too, especially towards the end) and does something with that as well.

The trio is a good one in Carlo De Rosa on bass and Henry Cole on drums. They give Hartley the platform to launch off of and swinging happens consistently. Fabio Morgera joins on trumpet for two cuts and most definitely adds something to the proceedings. Vocalist Dida Pelled lends her voice to one tune, a nice ballad.

The compositional Hartley is critical here. These are more than blowing tunes and he writes some good ones. But Hartley the pianist is the focus and he comes off modern and rooted in a way worth hearing.