Billy Hart Quartet, One is the Other 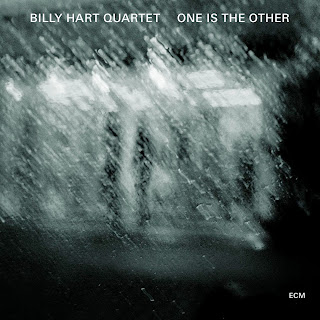 For all the years drummer Billy Hart has been out there doing it, with all kinds of beacon lighters and in all shades of time and tempo, you must feel the justness that he finally has come to a steady and engaging position as bandleader, head of the Billy Hart Quartet. As the group now has a second effort released on ECM, One is Another (ECM B0020033-02), there are further reasons to feel he is finally getting his due.

It is natural (at least for me) to feel the justice of this. He is one of the leading drummers of our lifetime, no question, and his place in the limelight as deserved as any. The second outing features a large slice of what the quartet can and does cover, with originals and a standard, with channelings of the later history of jazz, with players and playing that have the vanguard feel.

Mark Turner's tenor plays an important role here, as you may well imagine, but then pianist Ethan Iverson has a fundamental presence too. Bassist Ben Street gets the anchor firmly planted and Billy Hart's playing is as freely loquacious as ever.

If one might expect Billy's band to have a little more fire than it does here, that is putting an expectation on things that the artists choose to bypass. It's no less a great effort for its relative calm and no one could be accused of holding back. So you readjust your sites and you get some really beautifully played jazz here.

All the more power and acclaim to Billy Hart! Listen to this one, by all means.

Labels: mark turner, the billy hart quartet one is the other gapplegate music review, today's mainstream jazz in full flower